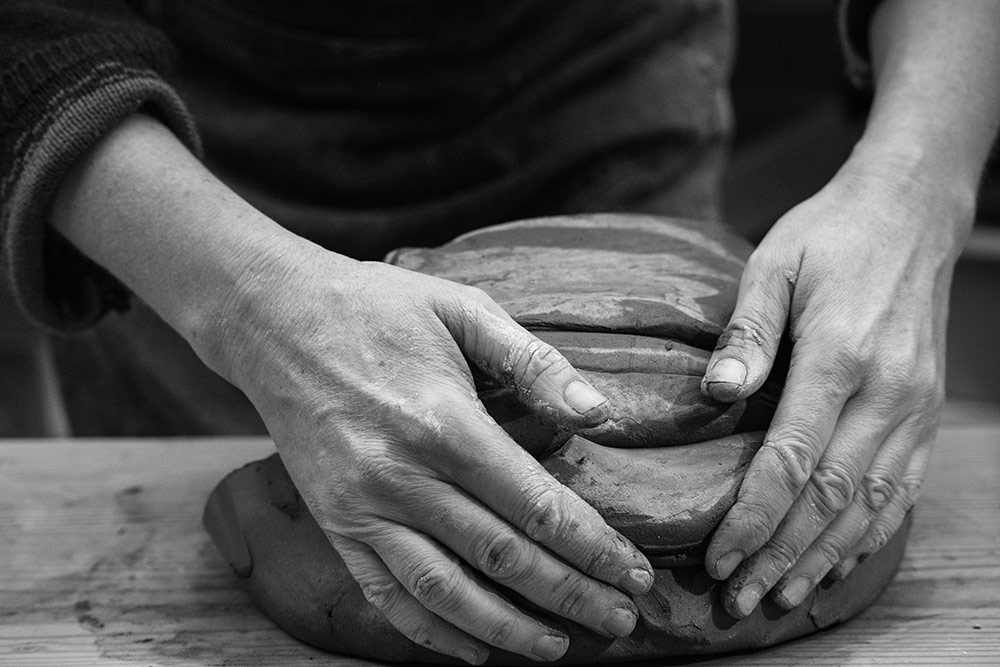 My work speaks about a Clay that does not want to hide anything, just tell the truth, its origins, what she met on her way. she is without artifice. She just accepts a little glaze, just enought to keep her from being completely naked, like adorning herself with a few jewels.
Her hues differ according to my moods and desires. Her cracked skin, her wrinkles, reveal the story she lived with my fingers and reveal her emotions.
The cracks on the surface of the pots fascinate me, that’s why I like to push her to the extreme, feel how far she will accept my intrusion.
Each time it is a new encounter, the gestures must be instinctive, spontaneous, in perpetual quest for freedom.
I love this relationship, this exchange, this game!! there is provocation, there are risks, there is sweetness, at certain moments of frustration and at others of Grace, suspended moment, delicious, divine…in fact indefinable , a dimension in which time no longer exists, I no longer exist, we are, the piece is alive .
After that, the flame of the oven will enter the dance, and then there will be three of us to express ourselves.
I come back to the “unique identity” of each piece, whether it be a cup, a bowl or a vase, by working the clay in this way, I cannot and I do not want to make two pieces similar. They are unique as every living thing on this planet.

I was born in 1971 around Paris. I grew up near the ocean between Bordeaux and Bayonnes.
After my studies, I left to explore the world.
Ceramics just happened to cross my path one summer in New York.

My first market was in 2004 and since then, I participate in several years